My AfricaTwin needed some new tyres. But they are hard to find in Centro America. Fortunately I got a contact in Guatemala City. He’s name is Cisco and he rides a BMW 800GS. After some calls he found a rear Heidenau K60 Scout in San Salvador and he still had a front Heidenau for his own bike but sold it to me 🙂

So I put on the back one in El Salvador and the front in Guatemala.

I don’t really like those Heidenau Scouts, they vibrate a lot and the front wiggles pretty hard some times. But they do a lot of kilometers, should easily go for 20000km!

Unfortunately my front forks started to leak again! It’s already the 5th time! But fortunately Honda had them on stock! So a quick visit in Guatemala City to replace he seals and I also got some spares for the next time! 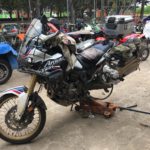 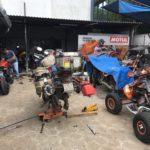 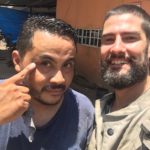 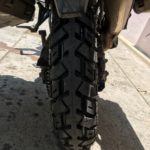 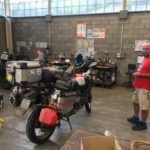 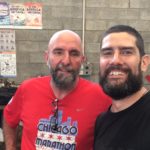 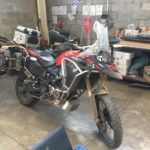 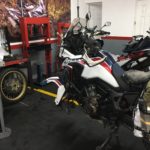 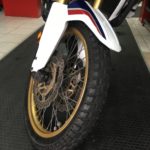 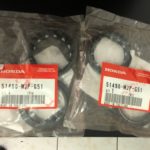 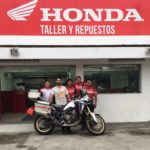 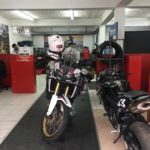 I crossed at Las Chinamas/Valle Nuevo, as I don’t like the big crossings on the Pan Americana.

Make sure you have at least to copies of the TIP of El Salvador (and all your other important papers, as usual).

At the first checkpoint an officer want to see just the TIP (Temporary Import Paper), no passport or anything.

Then you drive down to the right before the bridge and enter the immigration. They don’t give you a stamp in the passport, but a small printed note which you have to keep. I had an issue with my stamp of Nicaragua: they didn’t write how many days I was allowed to stay (usually 90 days). And as this is the CA-4 area (Nicaragua, Honduras, El Salvador and Guatemala), the first country defines it for all four countries. Nicaragua didn‘t write anything on their stamp and El Salvador doesn’t give you a stamp, so they said, I have to get it ‚fixed‘ with the Guatemalan stamp (which they did).

The aduana is in the same building on the other side (drive around the back of the building), but they sent me by foot up to the bridge first to get me registered and stamped the TIP and a copy of it.

Then back to te aduana to check your vehicle out of the country. they keep the copy, you get back the original.

Free to go over the bridge to Guatemala.

Immigration comes first, normally no issues there. They also fixed my issue with the 90 days since Nicaragua, they wrote the remaining days to their stamp and I was ‚legal‘ again.

But then aduana wanted a copy of the new stamp. There is a copy shop about 100m to the south on the left (direction to El Salvador) in the orange building (1q per copy).

Back at the aduana I gave copies of all the usual papers and the new stamp.

You have to sign three copies and they give you a slip to pay 160 quetzales (about 20$) at the bank, which is just another counter right there. They don’t accept USD, but there are plenty of money changers around.

Give back the payed bill to the aduana (they do a copy of it! But they didn’t want to make the copy of my passport!) and you‘ll get your Guatemalan TIP.

The road to Guatemala City is good, but I suggest to drive directly to Antigua.

When entering the area you get the customs declaration form.

Proceed to the blueish building, immigration and aduana are both in there.

Pay 2$ at the immigration, no cordobas accepted!

A woman of the aduana came to check my papers and my bike outside, then signed the TIP (Temporary Import Paper for the motorcycle). After that I had to go back to the aduana counter inside, where they kept the TIP and stamped my customs declaration form.

You have to hand out the declaration form at the boom gate when driving to the Honduras side.

It’s all in the one building on the right (except the copy shop).

You have to pay 2$ for immigration. They take fingerprints and a photo, then print a ‘stamp’ into the passport with a matrix printer. They want to check your yellow fever vaccine, so have it ready!

The aduana is also right there, but nobody was at the counter.

One of those shady helpers signaled me to come to the side entrance, where a woman then started to process my papers.

She printed the TIP and stamped my passport with the motorcycle information (huge stamp!)

Now you have to make two copies of the TIP and the stamped passport. I suggest to make three, as you may need a copy when entering El Salvador.

The TIP includes the insurance and costs 40$.

She didn’t give me a receipt, as the jefe/boss was not there. He just came back when I was already at my bike, but he then made the receipt (took another 10min).

In Honduras there were some road blocks and burning tyres in Choluteca due to demonstrations, but I could get through without issues.

Later I got stuck south of El Comercio. But the road block fortunately dissolved at noon.

I spent one night in hotel sunset in Nacaome. The next morning I left at 8am, hoping to be earlier than the road blocks.

There was one 1km before the border, but they let motorcycles through.

Again fingerprints at the immigration and then give back the TIP a counter to the right. They do another big stamp in the passport for the bike.

This border looked easy at first, but it took way longer than expected.

At the Immigration, three officers inspected my stamps for about 15 minutes. But then they let me go without any explanation (I later found out when leaving El Salvador, see update below). You don’t even get a stamp in El Salvador.

Just when it was my turn at the aduana the officer took his coffee break. 20min later he started to process the papers. He even gave me an English form for the motorcycle (chassis number, brand, model, etc). But then he wanted a copy of the TIP of Honduras! Which I didn’t have. I had a photo, so he wanted me to print it somehow. I suggested to mail it, but he couldn’t receive emails. In the end he copied the stamps of Honduras from my passport. It took him another 30min to enter the information into the computer and print. But instead of Switzerland he selected Sweden! When I pointed it out to him, he said, Switzerland was not in his computer. But I insisted and showed him that the country code is CH and he needs to scroll way up to find it.

After I finally got this paper I needed to drive about 5km to another aduana, where I had to get my new papers stamped. There were hundreds of trucks there waiting for their paperwork to be processed! But they let me right through to the counter. Then the computer system was down, so I waited for another half an hour… but finally I made it to San Miguel.

When I left El Salvador, they again discussed my passport for about 15min! But this time I got an explanation:

It’s about the CA-4 (like Schengen, but in Central America). When I entered Nicaragua, I came into the CA-4 area. I got the stamp, but they forgot to write how many days I was allowed to stay (usually 90 days for the whole CA-4 area, not per country!). So basically the stamp was incomplete and officially I would be allowed only 30 days (or even less). And as El Salvador does not do stamps, they could not ‘fix’ it. They told me that the immigration in Guatemala should fix it with their stamp and indicate the remaining days (of those 90), and that’s what they did. I’m kind of proud of myself that I was able to explain my problem in Spanish to the Guatemalan immigration officer 😁