I shipped from Dili in Timor Leste to Darwin in Australia.
As nobody was nearby, I needed to take a whole container. it’s much more expensive as I thought, especially in Darwin!

I stayed in Dili Central Backpackers, which seams to be the cheapest you can get (10$ in a 6 dorm, fan only). Nice backpacker community, an Australian owner, good food, but sometimes a bit dirty…

In Dili there is the Entreposto Ford dealership, where you can go and clean your bike. They have a high water pressure cleaning station and you can use their tools. You can leave the bike overnight, as the cleaning will take you some days (I cleaned for three days!). They even helped me to transport the bike to the container, on the back of a Ford pickup!
The manager there just requests some photos to hang in his office.
For the first quick cleaning I went to this car wash, it was 3$ for a pretty good first cleanup.

I found three shipping agencies in Dili: Bollore/SDV, Crossland (also known as Psedili.com) and ANL (they bought Perkins. Australia’s Tollgroup also ships with them).
All of them don‘t really respond to emails in a timely manner. And if you finally get an answer, the quote will be wrong anyways…
In my experience you have to go to Dili and walk into their offices to ask for a reliable quote.
For Bollore/SDV, the quote in Dili was 1000$ cheaper than per email, ANL was 500$ more expensive than per email.
All of them will fuck you over, at latest in Darwin.

Bollore/SDV (bollore.com):
SDV has been renamed to Bollore two years ago. But nobody seems to care, all offices are still labeled as SDV. Even in Darwin. From Darwin to Dili this company seems to be the most reliable and easiest way to go. From Dili to Darwin it‘s not going that smooth… at least they have the fastest ship, it only takes two days to Darwin. They go about once a month.
But you have to buy a whole container, they don‘t want to do LCL (they may do it if you really insist, but they did not want to give me a quote). They will get the empty container to their office, so you can load it basically in the middle of Dili, near the hostels and cleaning stations.
They also do the stamping of the Carnet for you, as the customs officer will come to their office to inspect the container and seal it.

Crossland/psedili.com:
They made a good quote in just 10 minutes when I was at their office. It was 500$ cheaper than Bollore. But they forgot to list the BAF of about 500$…
So they are almost exactly the same price as bollore. But their ship goes to Surabaya on Java first and will take about 25-30 days to Darwin. Goes about once a month.

ANL (former Perkins):
The most unreliable company. But the cheapest, as they do LCL: you pay only the space in the container which you are actually using. My quote was about 1300$. But they will not ship the container until it‘s full! This easily can take a month or two. Then it will take almost another month until the ship arrives in Darwin (normally 22 days, but they may move your bike into another container in Singapur, which can add another week). They claim to have two boats and go every 10 days, but one boat seems to be broken since more than half a year now.
With ANL, you have to go to the customs with your bike first and get your Carnet stamped. They won‘t handle the customs for you.

I loaded the container on a Tuesday, the ship was supposed to leave on Friday.
Unfortunately, the SDV office was closed on Wednesday and Friday, but nobody told me! The customs inspection and Carnet stamping was done on Thursday, so I got a bit nervous. Especially when the container was still sitting there on Friday at 1pm! I got no response from the office in Dili anymore, so I didn‘t know if the container has been loaded or not.

On Monday I’ve been already in Darwin and I‘ve got an invoice from a Chinese shipping company called Swire Shipping. So I went to their office in Darwin, which was closed. Called them up and finally got Jacky on the phone. She cannot do anything, as it’s just a small office and does not have access to the company’s computer system. I had to call the Sydney office, where you have to speak to a tape and nobody calls back, ever.
So I payed the invoice (1100AUD!) to get my Bill of Lading. Because without that, it’s not possible to get anything done at the customs.
The invoice was like this:
EQUIP HAND CHARGE: 65 AU$
DESTN PORT SERV: 546 AU$
DESTN DOC FEE: 90 AU$
MISC AGENT CHARGES: 450 AU$ <— these charges were false. got it back after one week!

it seems that you must have an agency in Darwin to communicate with the customs and get the inspection appointment.
the following fees did apply through the agency:
Local Handling (Agent fees?): 275 AU$
Customs Clearance: 145 AU$
Biosecurity Inspection Booking: 25 AU$
Biosecurity Attendence: 95 AU$
Quarantine Direction (2x?): 160 AU$
Container transport (harbour to warehouse): 300 AU$

I did all this through Bollore/SDV in Darwin as I thought they already have all the information about my shipping.  But the office in Darwin does not communicate with Dili, so they did not know anything about my container! And they didn‘t even try to ask them, I had to relay all the emails by myself and went to their office (taxi is 35 AU$, no public busses are going there) to give them my carnet.
Finally on Friday, after five days waiting in Darwin, I got an email from Bollore, that the inspection will be on Monday at 2pm.

Bollore stated at first, the container can stay at the harbour for the inspection. On Friday they suddenly needed to move the container to their warehouse, which costs additional 300 AU$!
If the inspection fails, it has to go back to the cleaning station, which would be another 300 AU$ for transport…
She could not really explain why they moved the container. Once she said something about storage costs, another time she said the customs wanted this…

On Monday at 10am she called me that I need to bring the bike key immediately (I locked the steering on my bike), although the appointment was scheduled for 2pm!
They wanted to move the bike to the quarantine area. So they tried to get my stuff out of the container without me being present! is this even legal??
the quarantine inspection lady came at 2:30pm…

I passed the inspection on the first try! it took about an hour and it was not as bad as all the horror stories told me.
Only needed to open the panniers and the seat. She mainly looked for dirt, soil and sand. She had a good look at the motor, center stand and radiator grill.  She found some dirt between the rear wheel and the motor, but she said that’s not much and cleaned it with a small brush.
I’m glad I cleaned the bike thoroughly! Make sure to degrease everything (like chain, sprocket, brakes) and clean/replace the airfilters (in my case I didn’t need to show, but I told her that I cleaned them).
The luggage was even easier to pass. I just needed to show the tent, sleeping bag, camping chair and motorcycle boots. Everything else of my luggage she basically just had a small glance or even completely ignored.
After the inspection you have to wait about one hour for the clearance, then you are allowed to take the bike with you.

I‘m in Dili for a weak now, been visiting multiple shipping agencies to get quotes for shipping my bike to Darwin in Australia.

unfortunaltely, I did not find any other bikers to share a container, so I have to pay the full prize 🙁  I may do another post with all the costs of the shipping when I arrive in Australia.

To get the bike into australia, it has to be VERY clean! Fortunately I could clean my bike at the local Ford dealership „Entreposto“! I cleaned it for about three days, took apart half of the bike. Antonio and ‚his boys‘ helped me out with tools and the pressure washer!

Thank you so much Antonio and your team!!

If everything goes like planned, the ship will leave on Friday or Saturday and arrives two days later in Darwin. There it will be a big bureaucracy to get it out of customs and inspected… 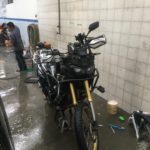 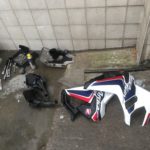 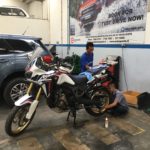 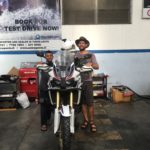 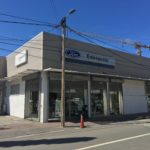 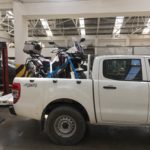 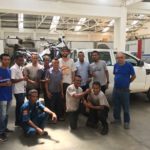 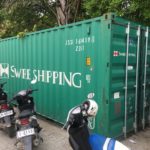 I crossed the border from Indonesia to East Timor/Timor Leste!
My Indonesian visa expires in two days, so this was a close one with the ferry!

On the Indonesian side they are building a complete new border crossing area. It’s all still under construction, but already in use.
The entrance to the area is here, it’s not on OpenStreetMap yet.

The first building is the immigration. You have to go in there, they won’t stamp the passport in the boothes outside. It was pretty quick, as I was the only one there (Wednesday morning at 8:30).
Then I had to look for the customs. It’s the building on the right side, take the third exit of the roundabout. It looks just like a construction site than an active building, but the customs office is in there.
It took only about 10 minutes to stamp my carnet.

And off I went to the Timor Leste border!

Directly at the booth they stamped my carnet, quick and easy!
Then I needed to put my bike on the parking lot and walk back to the immigration, which is the building on the left.
I had to fill out the usual form and customs declaration, which they give right at the entrance at a small table.

I read so much about issues to enter Timor Leste on the landborder from Indonesia and the required Visa permission in Kupang or online, that I was not sure if I really can go in without it.

But the whole process on both sides took less than one hour!